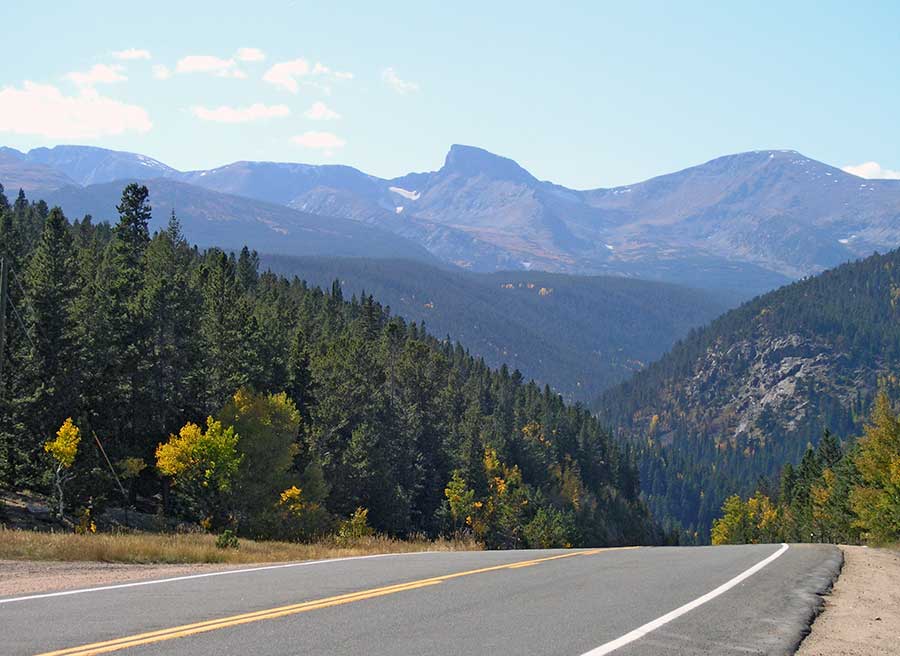 Located on the Peak to Peak Scenic Byway, no matter what direction you take to or from Nederland, the scenery is spectacular. 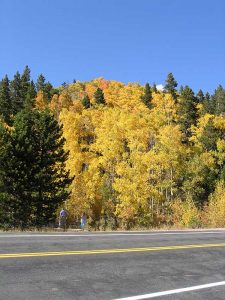 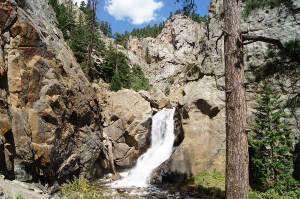 Meander your way along the oldest scenic byway in Colorado. Established in 1918, the Peak-to-Peak Byway takes visitors from the first gold mining town of Idaho Springs, through the renovated historic gambling town of Black Hawk, to the town of Estes Park, where it concludes. Throughout this 55-mile journey in the foothills of Denver and Boulder, the Continental Divide winks at you several times as you dart in and out of the forest and cruise by open meadows.

This is the main access road for many Forest Service recreational opportunities including campgrounds, picnic areas, hiking trails, and the Indian Peaks and James Peak Wilderness areas. Stop and visit some of the old mining towns of the past still thriving with small town activity, or explore the beauty of Rocky Mountain National Park where the wildlife outnumber the residents. This byway is open year-round weather permitting. 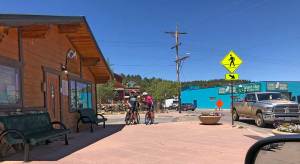 Route 2 – Start/End in Golden 136-mile loop
Golden to Black Hawk and Central City (via US 6)
Peak to Peak Scenic Byway north to Ward
Ward to Boulder (via Lefthand Canyon Drive)
Boulder to Golden (via Colo. 93)
End in Golden 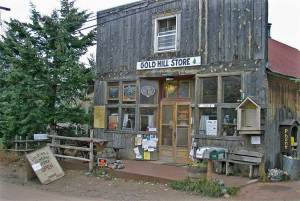 Gold Hill
Gold Hill was the first permanent mining camp in present-day Colorado when gold was discovered there in 1859. But just a couple of years later, the surface deposits were played out, and the miners left. Ten years later, a second boom prompted by the discovery of tellurium (the combination of gold and telluride minerals) in 1872 brought 1,000 people back to the town. At its height, Gold Hill had a school, a post office, a general store, a newspaper, several boarding houses, and a number of hotels, including the Mines Hotel, which was immortalized in verse by poet Eugene Field, who stayed at the hotel while working as a newspaper man in Denver.
Even after experiencing several major fires, the town retains many of its historic wooden structures. It has a small museum and a two-room schoolhouse, the Gold Hill School, which since 1873 has been the oldest continuously operating public school in Colorado. Other businesses include a general store and a restored inn listed on the National Register of Historic Places.

Allenspark
Established in 1918, Allenspark got its name from a miner who built the first cabin in the area, Alonzo Nelson Allen. The high mountain meadow where the town is located was first visited by Native Americans, followed by trappers, farmers, and ranchers. Skiing was popular in the 1920s and 1930s, and six ski jumps lured droves of competitors and spectators. The nearby Rock Creek Ski Area was developed after World War II and operated until 1952.

Lyons
The town of Lyons was founded in 1880 by Edward S. Lyon. He purchased 160 acres, noticing the potential in the red sandstone outcroppings for easy quarrying. The first main building to be built was the red sandstone schoolhouse in 1881 which was saved from demolition in 1979 and converted into the town’s history museum.
The large red sandstone mountains on three sides of town are from the Permian period, about 260 million years ago. Used in buildings around Colorado and the U.S., it is considered the hardest sandstone in the world, with a unique red or salmon color.
Although the September 12, 2013, flood caused a lot of damage in Lyons, the town has now recovered. In addition to its famous sandstone, Lyons is known for its art, culture, and music festivals. 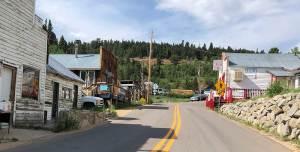 Ward
Sitting high at 9,253 feet, Ward is known for its standoffish alternative culture.
The former mining camp is now part of a national historic district. Calvin M. Ward made the first mining claim the area in 1860. A year later the Columbia vein was discovered. Five million dollars’ worth of gold was taken from miles along this vein. The railroad reached Ward in 1898 along the Switzerland Trail.
Georgia O’Keeffe painted several versions of the town’s wooden church when she visited in 1917. Only her oil painting, “Church bell, Ward, Colorado,” remains; it was found in O’Keeffe’s personal collection when she died.
Today, Ward remains much as it was during its heyday. Many of the old buildings are still intact, along with old mine dumps and scars on the surrounding hillsides, and the old railroad bed can be seen here and there. 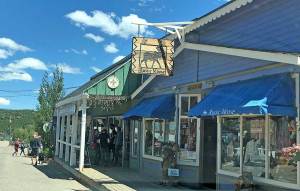 Nederland
Nederland survived three boom-and-bust cycles involving three different minerals: silver, gold, and tungsten. During the silver boom, president Ulysses S. Grant walked on silver bricks that had been mined in nearby Caribou and milled in Nederland. Nederland got its name when a Dutch company bought a prosperous silver mine in Caribou and a mill in the “lower” town that became Nederland.
When tungsten was in high demand for hardening the steel of gun barrels during World War I, Nederland’s population swelled to 3,000, and the Conger Mine was the greatest tungsten mine in the world.
Today Nederland is better known as a gateway to outdoor recreation in the nearby Indian Peaks Wilderness, Rocky Mountain National Park, Roosevelt National Forest, and James Peak Wilderness, and for its numerous coffee shops and restaurants, and its world-famous Carousel of Happiness.

Eldora
Eldora’s beginnings go back to 1850 and, of course, the discovery of gold. In 1875 the Fourth of July mine was opened, and by 1889, 1,200 people thrived in the community.
Eldora was originally named Happy Valley after a nearby placer mine. Later it became known as Eldorado Camp, but this caused confusion with a camp of the same name in California, and residents of this Eldorado had trouble getting their mail and payrolls, so the town’s name was shortened to Eldora.
Eldora was on the “Switzerland Trail,” and for 16 years, starting in 1904, the railroad brought loads of tourists to the community, and its restaurants and hotels thrived. Today, the quiet town is designated a historic district. Watch for dogs, kids, bikes, and walkers on the road as you drive through town.

Rollinsville
John Q. Rollins founded Rollinsville shortly after the Colorado gold rush began in 1859. He built a mill in his new town to handle the gold from the nearby mines. Rollins decreed that there would be no saloons, gambling houses, or dance halls in the town.
Rollins also laid out and constructed the first wagon road over the Continental Divide, and it was mostly over his grade that the Moffat railroad was built, and then the original mill built in Rollinsville by Rollins was torn down to make way for the railroad.
The post office in Rollinsville has been providing continuous service since 1869.

Black Hawk & Central City
In Central City, you can see the famous Central City Opera House, built in 1878 by Cornish and Welsh miners and still in operation. Next to the Opera House, the Teller House serves as a living museum of Victorian artifacts and furniture once belonging to Governor John Evans and Baby Doe Tabor.
Many of Central City and Black Hawk’s streets were built on rock walls that were erected without mortar by the Cornish and Welsh miners. You can still see some of those walls today.
For a while Central City was largest city in the Colorado mountains, rivaling Denver in size and even considered for the territorial capitol. It was Colorado’s first “boom” city, and it has been said that Colorado culture was born here.
Gambling was legalized in Colorado in 1991 for Black Hawk and Central City, and today, the two mountain towns host many gambling establishments alongside the opera and art galleries. 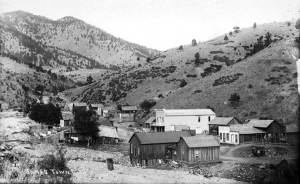 Jamestown
Jamestown was named for James Smith, an early discoverer of gold. The town was hit hard by the September 2013 floods when it was isolated due to road damage from the rains and the flooding of James Creek. Most residents were airlifted to safety under the direction of the Colorado National Guard to nearby Boulder.
The Jamestown Elementary School is one of the few remaining “one-room” schools in the country.